For the past three years, I've chosen a verse for our family.

In 2013 I was thinking about Jesus's words in John 14:6  Jesus said to him, “I am the way, the truth, and the life. No one comes to the Father except through Me.

I used those words in a "discussion" with someone who took verses out of context to say you believe in any God you want because everyone's path is different. I "argued" that every path had to lead to the foot of the cross. And I used John 14:6 because those are Jesus' own words. (NKJV)

Shortly after that I went into the Christian bookstore, and they had that verse on a sweatshirt that happened to be on sale. I bought one for both Jasmine and myself. 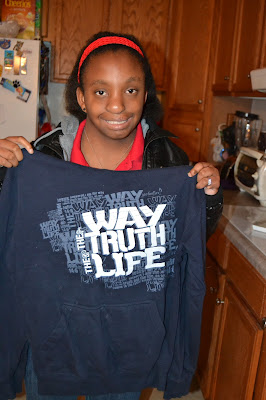 So I claimed that as my verse for the rest of that year and the next.

Last year I chose Matthew 5:16-18
“You are the light of the world. A city that is set on a hill cannot be hidden. Nor do they light a lamp and put it under a basket, but on a lampstand, and it gives light to all who are in the house. Let your light so shine before men, that they may see your good works and glorify your Father in heaven. (NKJV)

I thought of this because every year on either Christmas Eve or New Year's Eve, we light sparklers and talk about how Jesus is the light of the world.

As the kids left for school, I would tell them, go glow in the dark. 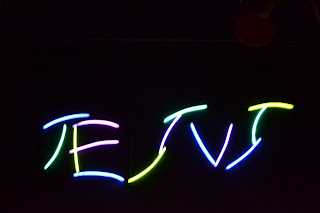 Ty made this out of glo sticks.

This is our verse for 2016:
He has shown you, O man, what is good;
And what does the Lord require of you
But to do justly,
To love mercy,
And to walk humbly with your God? Micah 6:8 (KJV)

Email ThisBlogThis!Share to TwitterShare to FacebookShare to Pinterest
Labels: Glow in the Dark, Scripture, verse for the year